Blockchain lottery. How does it work? 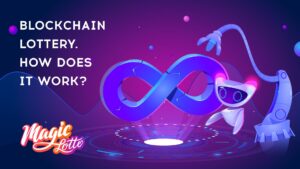 Since its appearing in the 15th century, the lottery has remained among the most popular gambling games. To play it, one does not need any special knowledge and skills, like in Poker or Blackjack, you will never spend more than you wanted on buying a lottery ticket, and at the same time, the winnings can literally change your life once and forever. The game principle and the basic rules of a lottery have not changed over the years: a player collects a combination of numbers and/or letters, and if at least the part of a combination coincides, a player receives the prize. Like many things now, a lottery is gradually moving online and the sector is growing year by year, although it’s worth noting that the big national lotteries are still the most popular (so far).

True, lotteries also have their drawbacks, which do not allow them to develop faster. And, perhaps, the main problem is the transparency of the drawing process and the low chances of winning (artificially). This is especially true for online lotteries. Even if a provider company has the appropriate license, you still cannot be 100% sure about your chances of winning. And frauds in this segment of the gambling market occur from time to time. Another significant problem is the complexity of the process of withdrawing the funds won. According to the laws of most countries, jackpots are taxed, and the process of receiving money, including various procedures, can be quite long, which definitely spoils the joy of winning. And if you want to play the offline lottery, you also have to go and physically buy a ticket, and then in no case lose it somewhere at home, otherwise, nothing will come of it.

But now decentralized lotteries based on blockchain technology are starting to appear on the market and with their appearance the rules of the game start changing. How and why does this happen? Let’s figure it out.

Basic principles of a decentralized platform

As we just mentioned, the problem of fairness and transparency in the drawing process remains the main reason preventing online lotteries from outriding traditional ones, although in other aspects they are much more convenient. And this is exactly the thing that blockchain provides. Just like with cryptocurrencies, the parties of the transaction do not have to trust each other. It’s all about the distributed ledger and smart contracts. Any operations on the network are displayed in the general ledger and absolutely all participants see this list of operations. Smart contracts monitor the fulfillment of the terms of a transaction, that is, intermediaries are completely excluded and no one, not even the platform owner will be able to manipulate the results of the draw because it will immediately become noticeable… The application itself (dApp) operates on the blockchain network and all interactions are fully automated.

Let’s look at the game process with a specific example. Magic Lotto is a game based on the blockchain platform of the latest generation, Qchain. The platform itself operates based on the PoS + PoT consensus, and the system rate is over 100,000 thousand transactions per second, which potentially makes it a worldwide game. The application implements several popular lottery formats: 6/49, JokerBall, 7 Plus lotto, Free Lotto.

The internal QDT token is used as the currency – all bets, winnings, and bonuses are made in this currency. Thus, another problem with the receipt and withdrawal of money is solved. All operations are carried out instantly and automatically, including the accrual of winnings. And thanks to the minimum commission within the system (1% for all operations), players’ losses when withdrawing funds will be minimal.

Another important nuance is that Magic Lotto has an affiliate program, according to which all players who have invited their friends to the platform receive their bonuses, the total amount of which can be up to 10% so that you can even receive passive income from active players.

Thus, we can highlight the following advantages of the blockchain lottery:

complete transparency of the drawing process (and at the same time anonymity);
automatic charges (after buying a ticket a player does not need to do anything);
the ability to instantly withdraw funds;
minimum commissions for transactions;
bonus programs.

The outwardly simple and clear interface of a blockchain lottery at first glance does not differ from centralized solutions, but the internal content is a completely different matter. The moment when this technology becomes widespread a real competitor to other systems and offline lotteries, is only a matter of time, given all its advantages and capabilities. It is likely that very soon we will see a real revolution in this sector of the economy.

Tokenized shares: why are they needed and how does it work?

Cryptocurrency: how to buy it safely?

When XRP starts to rise?

Bitcoin price has recovered to levels above $57,000